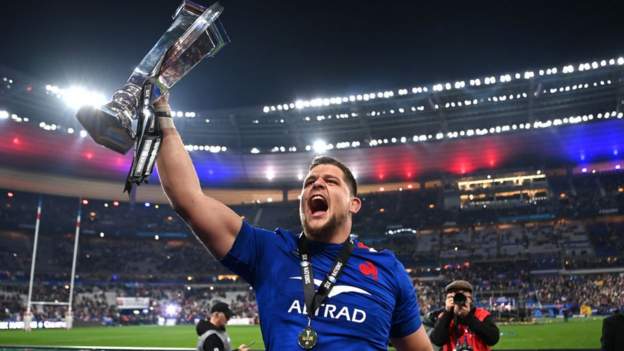 France strutted to a first Grand Slam in 12 years as they ran in three tries to comfortably see off England in front of a jubilant Stade de France.

England’s Freddie Steward, deployed on the wing, stepped and swooped to score after Joe Marchant’s break after the interval.

But it was a rare moment of danger from England, who were kept at arm’s length.

France captain Antoine Dupont darted under the sticks soon after and the hosts played out the final 10 minutes in comfort as their fans started the party.

La Marseillaise reverberated round the stands and tricolores fluttered from every seat as the final scrum was set with the clock in the red.

Gregory Alldritt’s kick to the stands moments later was the signal for his team to drop to their knees and savour a clean sweep that has been brewing for the last couple of campaigns.

England finish third in the Six Nations, but this contest revealed the chasm that separates them from the champions.

France were superior in every area. Stronger up front, more accurate in the backs, tighter in defence, more clinical in attack.

For England, defeat is a sobering reality check. There are still 18 months until the start of the Rugby World Cup, but to close the gap on France in that timeframe requires swift, steep improvement.

There was little sign of it at the Stade de France. A campaign that started with Eddie Jones’ side stifled by Scotland, ended with them overwhelmed in Paris, and there have been precious few positives in between.

France shoot for the stars at the Stade

England had creaked long before the opening score. Fickou knocked on as an intricate pre-planned move prised open a hole for him before Jonathan Danty’s offload went to ground on a dangerous broken-field counter.

The visitors’ luck could not hold. France duly got a grip of the ball and the match. Gabin Villiere’s dart down the left dragged England’s defence out of shape and Romain Ntamack’s looping mispass found an unguarded Fickou, who dived over on the opposite wing.

But on both occasions, France were quicker into the breakdown to turn over possession and stem the momentum. The rest of the bombardment was eagerly gobbled up by full-back Melvyn Jaminet and his two wings.

France’s threat was never far from the surface, but England dredged in vain for a way through the defence.

The visitors rarely looked like stringing together a series of profitable phases to build pressure and only clung within range thanks to a pair of Smith penalties as half-time loomed.

Cros ensured the difference between the sides was better represented on the scoreboard by the break though as he stretched over to make it 18-6 after a sky-hooked one-hand pass from Fickou had sent Villiere scampering clear.

England’s toil suddenly, unexpectedly bore fruit early in the second half. Marchant barrelled through a hole, Smith and Henry Slade combined to get the ball wide and Steward stepped inside the covering Ntamack to score.

Smith converted from the touchline. The lead was trimmed to five points.

It could have been where the Stade de France got twitchy. It could have been there the pressure of ending a Grand Slam drought bore down on the players. This generation is different though. Just as when Ireland threatened a comeback in round two, they found another gear.

Number eight Alldritt picked and went round the fringe and slipped the ball inside to Dupont, with whom he has played on and off since the pair were boys at the small-town southern club of Auch.

World Player of the Year Dupont did the rest, shrugging off two tacklers on his way in.

They are both stars on the biggest stage now. Few would bet against them or their team for the biggest prize either when France hosts the Rugby World Cup next year.

Player of the match – Gael Fickou

‘Two wins not acceptable for England’ – best of the reaction

Former England wing Ugo Monye on Radio 5 Live: “Third place is a fair reflection of where England are. Will the fans be frustrated? Absolutely.

“This England team have been in a cycle of boom or bust. Last year was a clear bust but to back it up with the same number of wins, for the level of players we have, for the player pool we have, the financial backing we have and the coach we have, it’s just not good enough.

“France are streets ahead of every other team in this competition. They have a brilliant style. They have flair with work rate and physicality, but they’re also devoid of those big moments that have cost them down the years.”

Former England scrum-half Matt Dawson on BBC Radio 5 Live: “Dupont is not even halfway in his career and goodness me, he’s just going to get better and better.

“He’s one of those, it doesn’t matter what sport it is, the best players make it seem like they are playing in slow motion.”

‘We wanted to write our names in history’

France scrum-half and captain Antoine Dupont said: “This is our third tournament together as a team. We were very close twice so we know how difficult it is to win.

“We wanted to write our place in history.

“Of course we have next year’s World Cup in mind, we discuss it between us, but for now we’ll enjoy the Grand Slam and we’ll start thinking about the World Cup later.”

France team manager Raphael Ibanez, speaking to ITV: “Twelve years is a very, very long time and this was an intense final game but we have a fantastic group of players.

“We were thinking we needed to hold on and fair play to England, they tried to break us down.”

Best of the pictures