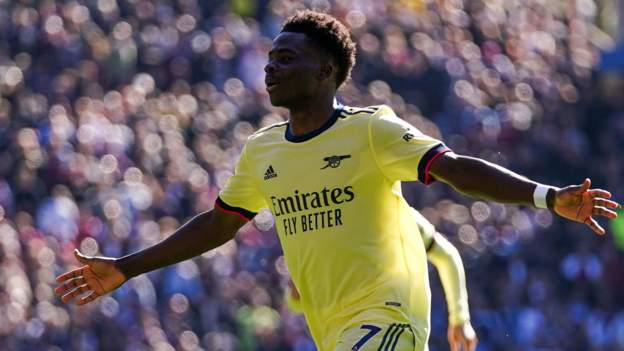 Arsenal strengthened their grip on fourth place in the Premier League with a narrow victory at Aston Villa.

Bukayo Saka was the standout player as the Gunners secured a sixth win from seven games to move four points clear of fifth-placed Manchester United with a game in hand.

The England international scored the only goal in the first half with a low drive from the edge of the area after Villa failed to properly clear a cross into the box.

Villa improved after the break and went close when Ollie Watkins’ deflected shot clipped the outside of the post, before substitute Danny Ings sent a looping header on to the roof of the net.

Arsenal’s jubilant celebrations at the final whistle showed just how significant they feel this result could be as the north London club seek to return to the Champions League for the first time in five years.

The win was based on a vibrant first-half display, followed up by a resilient defensive performance after the break.

Saka was excellent during the opening 45 minutes, tormenting 39-year-old Ashley Young who was in the Villa side for the injured Lucas Digne.

Saka got in behind Young inside the opening two minutes to create a chance for Emile Smith Rowe, while another cross struck Ezri Konsa and needed a fine stop from Emiliano Martinez to prevent an own goal.

The goal came from a quickly taken free-kick that caught Villa out down the right, with Cedric’s cross only cleared to Saka at the edge of the box, who fired home through a crowd of players for his 10th goal of the season in all competitions.

Arsenal tired after the break which allowed Villa to get more of a grip on the game, but they prevented the home side from having a shot on target until the final minute of stoppage time, when Philippe Coutinho’s free-kick was pushed away by Bernd Leno.

Player of the match